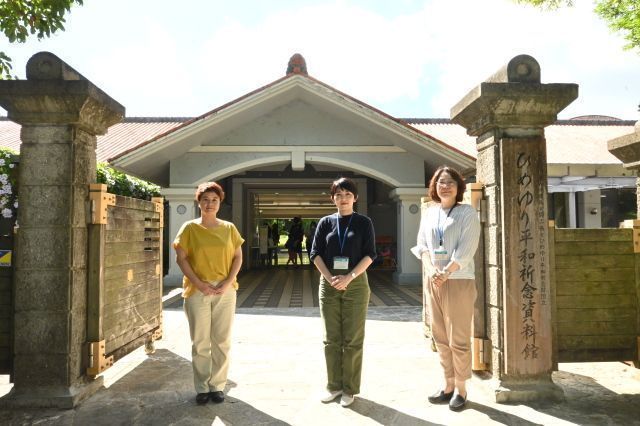 Staff from the Himeyuri Peace Museum, which was awarded the Okinawa Peace Award. August 12, Ihara, Itoman

Okinawa governor Denny Tamaki awarded the 11th Okinawa Peace Award, which is awarded to individuals or organizations who contribute to building and maintaining peace in the Asia-Pacific region, to the Himeyuri Peace Museum, which is run by the Okinawa Himeyuri Peace Foundation. The award was established in 2002, and is awarded once every two years.

The foundation is a continuation of the alumni association founded in 1960 for the survivors of the Himeyuri Student Corps, a nursing unit comprised of students and teachers from the Okinawa Shihan Women’s School and Okinawa Daiichi Women’s School mobilized in the Battle of Okinawa. The Himeyuri Peace Museum was founded in 1989, and through testimonials from survivors and items on exhibit communicated the tragedy of war and value of peace. In the 33 years since the museum opened it has welcomed over 23 million visitors.

The selection committee for the award chose the museum foundation for their straightforward communication of the tragedy of war and value of life, and for showing the world an Okinawa as a focal point for spreading peace. Their continued activity is aligned with the ideals of the peace award, and “it is a suitable thing to honor to celebrate the 50th anniversary of Okinawa’s reversion to Japan.”

The award ceremony will be October 28 at the Harbor View Hotel in Naha.