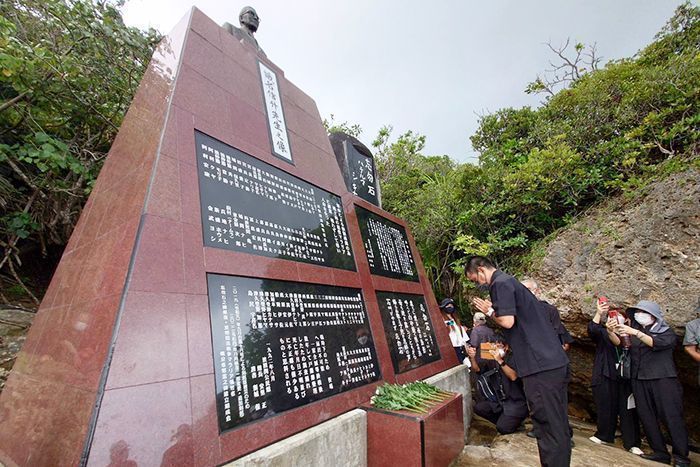 Attendees pay their respects at the memorial service held at the restored Wasurena-Ishi Monument (August 15, Haimida Beach on Iriomote Island in Taketomi)

Iriomote Island, Taketomi – On August 15, a briefing session on the restoration of the Wasurena-Ishi (forget-them-not stone) Monument was held at Haimida Beach on Iriomote Island in Taketomi. The Wasurena-Ishi Monument commemorates civilians who lost their lives to malaria after being forcibly evacuated from Hateruma Island to Iriomote Island during World War II. A memorial service honoring the dead was held in conjunction with the briefing session. Attendees laid flowers before the restored monument and renewed their vows to renounce war.

The Wasurena-Ishi is a stone on Haimida Beach and serves as a reminder that many of the people who were forcibly evacuated from Hateruma Island lost their lives. Ten Japanese characters were engraved on the stone by then principal of Hateruma Citizen’s School, Shinsho Shikina (deceased), who taught children on the beach. The inscription reads “Wasurena-Ishi Hateruma Shikina.” A cenotaph was erected near the Wasurena-Ishi, but was damaged during Typhoon No. 18 in September 2019 when the plaques bearing the names of the dead were torn off and broken. In July 2020, a group was formed with the goal of repairing the monument. The group worked to raise money for the repairs that were finished in May of this year.

The chair of the group, Isao Uchihara, spoke during the memorial service held in front of the repaired monument, saying “For as long as I am alive, I will pray for everlasting peace. I hope to spread peace together from this place.”

Anzo Kedamori was formerly the superintendent of the Hateruma Board of Education. As a child during the war, he was evacuated from Hateruma Island to Yubu Island near Iriomote Island and contracted malaria. He said, “At the time, I was only four years old, but I remember the malaria. Those who returned to Hateruma died and were buried wrapped in blankets. It was horrific. We’ve started to hear the phrase ‘proactive contribution to peace’, but my hope is that we can continue to live free from war. I hope that Bashima (Hateruma Island), where we have had this tragic experience, can become a factory that produces peace.”

Fumio Shikina, the late Principal Shikina’s son, also spoke, saying “The people of Hateruma stood up and built this monument in hopes of ridding the world of war. I hope that it contributes to peace globally.”