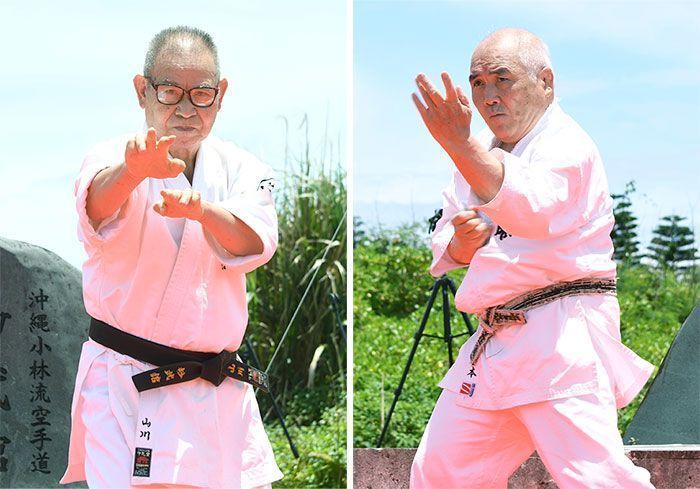 Yomitan – At the Okinawa Shorin-ryu Myoubukan, Masao Yamagawa, 85, head of the Urasoe branch of the dojo, and Yoshikazu Kishimoto, 74, chairman of the Hyogo main office, were both promoted to the 10th dan, the highest rank achievable in Karate. On June 18, they held an award ceremony and demonstration at the Shinjo Heitaro monument in Cape Zanpa Park. Yamagawa was smiling happily as he said, “It is nice to be recognized for all of my hard work.” Kishimoto commented, “I want to continue teaching people Ryukyu martial arts.”

The Myoubukan was founded in 1960 by Yoshimasa Matsuda, 82, who serves as the chairman. Matsuda is a karate master from Yomitan, and was a disciple of Heitaro Shinjo. Shinjo inherited his techniques from the master “Chan Migwa,” Chotoku Kyan. The school has five dojos in Okinawa, and a number outside of the prefecture as well, which in total currently trains over 200 students.

Yamagawa studied under Matsuda prior to the existence of the Myoubukan. His family of five trained at their house in Urasoe, and the house would later become the Urasoe dojo. The thing he remember most is performing karate with his family at the 1975 International Ocean Exposition in Okinawa. “It is thanks to the support of my wife and children that we are here now,” he said with unending gratitude.

Kishimoto was originally a judo practitioner. He returned to Okinawa after his dojo closed in 1974, and he took the opportunity to start studying karate. Kishimoto, who still advises a judo club at a junior high school, says that incorporating karate techniques into judo has made the school a powerhouse. The school is a regular participant in the national judo competition, having won two national titles while he has been there.

For their ceremonial demonstrations Yamagawa performed Passai Sho, while Kishimoto performed a secret technique. Their mature techniques were performed with no extraneous movements. Matsuda expects, “They have not only aligned their spirit, techniques, and strength, but have also contributed to society and gained life experience. I hope they will continue producing people that will go out into the world and be exceptional.”