Editorial: No more waves should be made after Taiwan visit by U.S. Speaker of the House 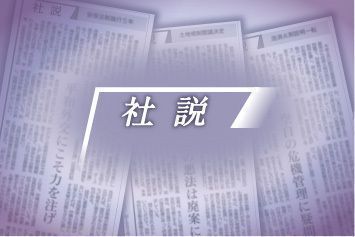 Why at this time? It is baffling. Speaker of the House Pelosi visited Taiwan during her tour of visitation in Asia and held talks with President of Taiwan Tsai Ing-wen. China's leadership strongly opposed this move, and the visit will unavoidably deepen the confrontational relationship between China and the United States.

Speaker Pelosi's visit to Taiwan has imprudently led to increased military tensions. If, incidentally, a military conflict breaks out, it is not unlikely that Taiwan and neighboring Okinawa could be swept up in the conflict. I ask that the United States and China exercise restraint and hold dialogues so that tensions do not increase any further. I wish for the Japanese government to also diplomatically work toward easing tensions.
Before Pelosi's visit to Taiwan, U.S. President Biden held a telephone conference with Chinese President Xi Jinping. President Xi, speaking of Speaker Pelosi's plan to visit Taiwan, warned that, "Those who play with fire will perish by it." According to President Xi, who is aiming to secure his third term at the National Congress of the Chinese Communist Party to be held in the fall, the Taiwan question will not be conceded.
President Biden also attempted to calm the situation by emphasizing that there will be no change to America's policy of recognizing the One China principle, which states that that Taiwan is part of China and China is an indivisible territory.
Then why did Pelosi go through with her visit to Taiwan? China, which has achieved marvellous economic growth, poses a threat to the hegemony of the United States through rapid military expansion. As such, a hard-line approach to China has gained popularity across party lines in the United States. Pelosi herself has harshly criticized human rights issues in China. Considering cancelling her visit as giving in to China's threats, Pelosi therefore followed through with the visit. If Pelosi made the visit to Taiwan with the knowledge that it would make waves, this does not merit diplomacy.
As a result of Pelosi's visit to Taiwan, after August 4 China put on the pressure by announcing that it will be conducting military exercises, including live ammunition training, in six air and ocean areas surrounding Taiwan. The target areas include Japan's Exclusive Economic Zone (EEZ). The U.S. Navy dispatched a carrier strike group to the surrounding ocean area. Additionally, the Taiwanese Armed Forces have also intensified their alert status, raising military tensions.
For Okinawa, the Taiwan question is not merely someone else's problem.
The U.S. Marine Corps used the Formosa Conflict in 1955 as an opportunity to move to Okinawa from places such as Yamanashi and Shizuoka. Due to this move, land was forcibly requisitioned and the Island-wide Struggle occurred.
At the time of the Taiwan Strait Crisis in 1958, during which China and Taiwan were embroiled in armed conflict, the U.S. government considered making a nuclear strike on mainland China. U.S. military leadership recognized that if this came to pass, retaliation including nuclear strikes would be almost certain, and that targets of retaliation would potentially include Okinawa.
In January this year, the U.S. and Japan announced the strengthening of the Self-Defense Forces in the Nansei Islands as well as increases in joint use of U.S. and Japanese facilities. The U.S. Marine Corps is expected to set up temporary attack bases in the Nansei Islands in the initial stages of a joint operation of the Self-Defense Forces and the U.S. military, which was developed in anticipation of a Taiwan emergency. The majority of these temporary bases would be on inhabited islands. If an emergency were to occur, Okinawa would be targeted right at the beginning and the risk of local residents being swept up in the struggle would rise. We must not allow a repeat of the Battle of Okinawa, in which one in four Okinawan citizens died.
Furthermore, such an occurrence would inevitably cause the security guarantee environment in East Asia to deteriorate. Face-to-face talks between the leadership in the United States and China should be implemented immediately so as to avoid conflict.