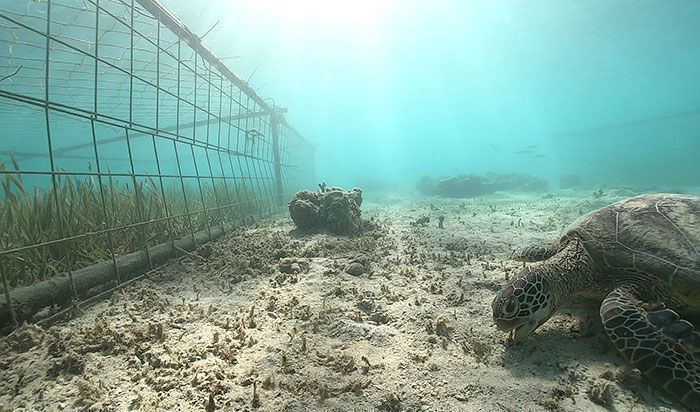 Iriomote Island, Taketomi – Around Iriomote Island in Taketomi, green sea turtles, themselves an endangered species, are eating too much of a rare seagrass called enhalus that, within Japan, grows only in the Yaeyama region. It appears that the number of green sea turtles in the region is increasing, and the damage caused by their enhalus consumption is affecting the fishing industry. The Ministry of the Environment has begun taking measures, such as installing fences in the ocean, to counter the destructive consumption and will formulate a plan for the conservation of the enhalus sometime this year.

According to the Iriomote Wildlife Conservation Center, the enhalus population in Amitori Bay on the west side of Iriomote Island began to decline in 2009 and was essentially annihilated by 2013 as a result of being over-consumed by the sea turtles. In the nearby Sakiyama Bay, approximately 23 hectares of enhalus have been impacted by the turtles, leaving only 684 square meters of healthy enhalus in the areas where the Ministry of the Environment has installed fences in the water to protect the plants.

According to the Kuroshima Research Institute, which is associated with the Japanese Sea Turtle Association, there were an estimated 200 green sea turtles living in the area around Kuroshima in 2011, but that number had more than doubled by 2019. Kazunari Kameda is a researcher at the institute, and says that the green sea turtle population around Yaeyama is growing due to several factors, including progress made in controlling the shark population and reduced trapping by fishermen.

However, the impact of the green sea turtles’ diets on the fishing industry cannot be denied. According to the Iriomote Wildlife Conservation Center, the enhalus is a “nursery of the sea”, where fish and squid lay their eggs and small fish grow. There is a risk that the sea turtles’ consumption of the enhalus will destroy the ecosystem. A representative of the Yaeyama Fishing Association says, “They’re saying that sea turtles are eating the seagrass around Iriomote Island, so fish aren’t coming here anymore.”

Against this backdrop, the Ministry of the Environment has incorporated considerations for managing the green sea turtle population into a proposed plan to maintain and restore the ecosystem. Considering the role of the sea turtles as an asset to tourism, the ministry is aiming to create a plan for coexistence with the green sea turtles.

A representative of the Iriomote Wildlife Conservation Center says, “We are running out of time to help the shrinking enhalus population, so we have to prioritize its protection. However, we also have to think about coexistence with the green sea turtles in the future. It’s an enormous question of how to restore balance to the ecosystem.”