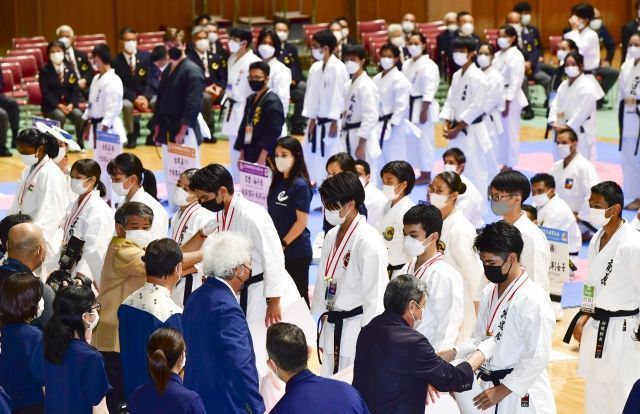 Winners at the 2nd Okinawa Karate World Tournament receiving their medals – August 7, at the Okinawa Budokan in Naha (photograph by Moriaki Kise)

The 2nd Okinawa World Karate Tournament (hosted by the tournament’s executive committee, Okinawa Prefecture, and the Okinawa Dento Karatedo Shinkokai) finished the last of their competitions on August 7, and concluded the event with an awards ceremony and closing ceremony. The finals for each of the five disciplines at the tournament: Shuri/Tomari-te, Naha-te, Uechi-ryu, and the two forms of traditional martial weaponry (staff and sai), were held at the Okinawa Budokan in Naha, and a winner was determined for each of the 40 events.

The Junior Tournament, which took place August 2-3, had 942 participants, and the main tournament, which took place from August 4-7, had 780, for a total of 1,722 participants. The event welcomed karate-ka from 24 countries, who came to the birthplace of karate to show off the results of their hard work and training, while overcoming differences in nationality, race, religion, and language in using the “martial art for peace” to deepen friendships. Competitors made a vow to continue training and meet again at the next tournament.

There was also a farewell ceremony that took place at the Okinawa Karate Hall on August 8. The next tournament is planned to take place four years from now, in 2026.