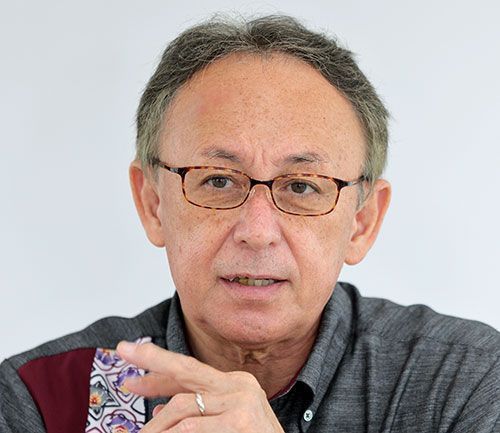 In response to the reshuffle of the Second Kishida Cabinet, on August 10 Okinawa Governor Denny Tamaki called for progress toward matters requested by the Okinawa Prefectural Government, such as the consolidation and reduction of U.S. military bases and a revision of the U.S.-Japan Status of Forces Agreement. Touching on the fact that recently ballistic missiles fired by the Chinese People's Liberation Army have landed in the Exclusive Economic Zone (EEZ) in the ocean near Hateruma Island for the first time, Governor Tamaki said, "I want progress in diplomacy by which mutually beneficial relationships and trust with neighboring countries is built. Through maintaining consistent diplomatic channels, Okinawa also receives information so as to not be blindsided by unexpected circumstances."

In a statement intended for the Minister of State for Okinawa and Northern Territories Affairs Naoki Okada, Governor Tamaki said, "I want the economy to be restored from the state of affairs of the coronavirus as soon as possible, and continued efforts striving to promote and develop Okinawa by following a new growth strategy." In the reshuffle, Katsunobu Kato retained the seat of the Minister of Health, Labour and Welfare, who is in charge of novel coronavirus countermeasures. Governor Tamaki stated that, "I want funding for the countermeasures to be firmly ensured. I want to see cooperation among the prefectures and municipalities to thoroughly handle measures for preventing the spread [of the coronavirus]."