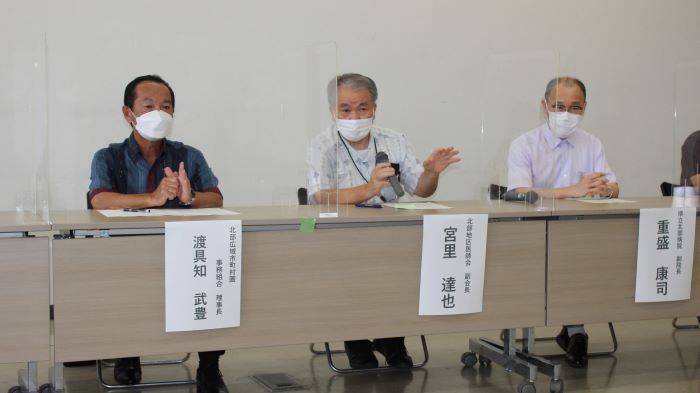 With the sudden increase of COVID-19 cases, the mayors and medical personnel of Okinawa’s northern region held an emergency press conference on August 18 at the Northern Kaikan in Nago, where they announced, “We are experiencing a collapse of our medical system.” Additionally, they strongly advised that 1. People be thorough in getting their vaccinations (especially for older people) 2. People refrain from calling ambulances for non-serious matters, and 3. People refrain from calling the Northern Area Health Association and Okinawa Prefecture North Area Hospital for inquiries about coronavirus testing.

According to the statement, the northern area is experiencing around 300 new cases per day. The number of emergency medical transports is also rising rapidly, and that people are not able to be immediately admitted to a hospital. Tatsuya Miyazato, vice-president of the Northern Area Health Association, said, “From now we may be facing a situation where we have to make choices over peoples lives at these medical facilities.”

As of August 18, the Northern Area Hospital had a coronavirus hospital occupancy rate of 80%, and non-covid occupancy rate of over 87%, and the North District Medical Association Hospital was fully occupied for the coronavirus, and at around 90% for non-covid related occupancy. Both hospitals are also dealing with medical worker absences due to infection of or close-contact with the coronavirus, leading to a staffing shortage for dealing with critically ill patients.

Northern Area Hospital vice-president Koji Shigemori gave an example of people reporting symptoms as worse than they actually are, and calling an ambulance, saying, “It has an adverse effect on people who need help right away,” and asked people to only call an ambulance when appropriate. He added, “We are approaching a situation where medical workers are unable to treat all patients. The best measure of defense is to get vaccinated.”

The press conference was attended by four mayors from the Northern Area Municipality Association, led by the association’s chairman, Nago Mayor Taketoyo Toguchi.