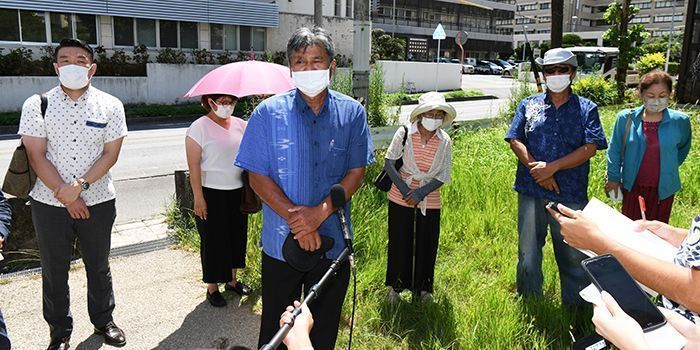 After filing the lawsuit, citizens and their team of lawyers answer questions from the press corps in the morning on August 23 at Jogaku Park in Sobe, Naha City (photograph by John Matsumoto).

Now is the time for a judicial decision about land reclamation. After the Okinawa Prefectural Government (OPG) rejected the MOD Okinawa Defense Bureau's design change application for the construction of the Futenma Replacement Facility in Henoko, Nago City, said rejection was thrown out. On August 23, twenty residents of the area around Henoko filed a new lawsuit concerning the OPG's rejection being thrown out. According to an interview with the press corps after filing their lawsuit, the plaintiffs hope that the court tries the case and gets to the heart of it.

Takuma Higashionna, 60, the head plaintiff of the plaintiffs' group, said, "If no decision is made now, then when? I hope the administration of justice recognizes our standing to sue, and exercises responsible decision-making." In the past, the question of standing to sue has acted as a hurdle to lawsuits filed by private citizens, which have therefore been dismissed at the door.

Meanwhile, the status quo is that even when a U.S. military base has been completed and damages are claimed in court, the case is dismissed on the basis of the "third party act theory" which states that Japan's rule of law does not have authority over the use of US military facilities. Takemasa Kinjo, 65, emphasized that, "This is a problem affecting Okinawa as a whole." He also said, "All we can do now, so we don’t have any regrets, is take the case to court."

Etsuko Urashima, 74, thinks that essentially, anyone should be able to become a plaintiff in this case given that the abundant nature involved is common property. She said, "Since the structure of this trial limits the plaintiffs, local residents like us are stepping up and serving as the plaintiffs. I hope people will take notice of the trial."

Higashionna voiced his high hopes, saying, "If we can only get to the heart [of the case], I think the correct decision will be made." The attorney Chihiro Kawazu from the team of lawyers said, "I want to work out a way by which we pass through the door."