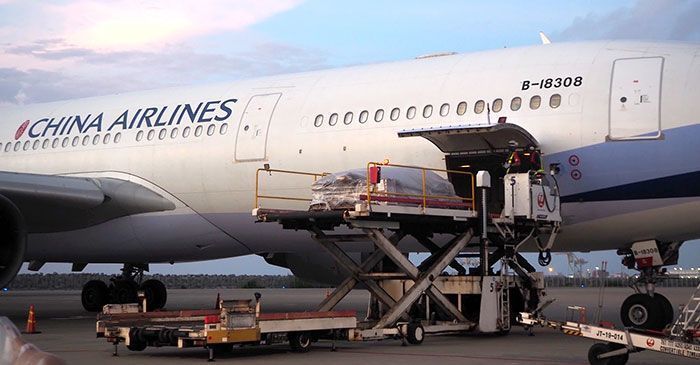 A China Airlines’ plane being loaded up for a flight to Taipei – August 25, Naha Airport

Okinawa Prefecture, China Airlines (Taiwan), and Yamato Transport announced on August 25 that they would be restoring a shipping route between Naha and Taipei (Taoyuan Airport) using a China Airlines Airbus 330 commercial aircraft. The aircraft was packed with around 45 kg of fish from Ishikawa, and around 10 tons of Okinawan produce. The plan is to fly the route around twice every three months.

Due to the coronavirus pandemic, direct transport flights between Taiwan and Naha Airport had been suspended. Currently Okinawan produce is being transported through Narita Airport, however this gives rise to some of the produce being lost to waste due to the six-hour plus flight times.

The re-instated route will not just be carrying Okinawan cargo, but will also carry “mainland goods” such as fish from Ishikawa, which is being shipped internationally via Okinawa as part of Okinawa’s plan to assert themselves as a global logistics hub.

Since this will involve a passenger plane being loaded with commercial goods, the plane will be able to profit from commercial transportation in addition to passenger fees. There is a hope that foreign airlines will reopen lines sooner even if they aren’t able to entice passengers right away.

Wei Lin-Sun, head of China Airlines’ Okinawa branch, commented, “It would be great if Okinawa can contribute to shipping. I hope we can start carrying passengers again soon as well.”

Yamato Transport is investigating adding four-to-five additional flights per year based on their needs.